Kings Work on Ice, but Most Live on the Beach 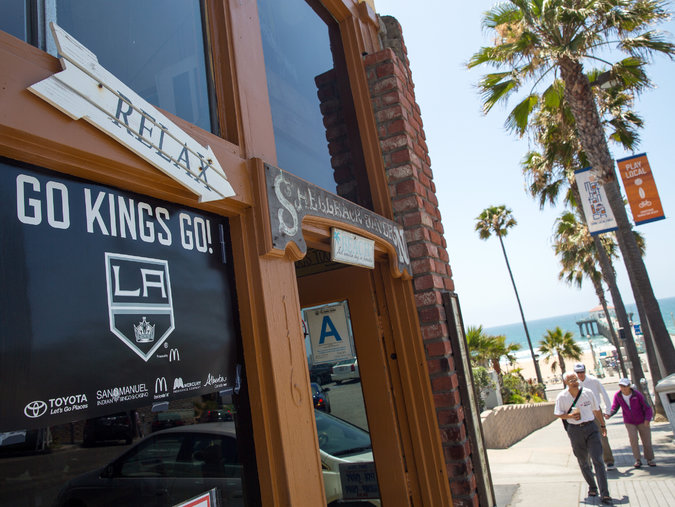 MANHATTAN BEACH, Calif. — When the Los Angeles Kings won the Stanley Cup two years ago, the trophy’s first postgame trip was to a small bar near the beach, within walking distance of nearly every player’s home.

The Cup soon spent time touring nearby haunts, and when it came time for players to shed those unruly, two-month-old playoff beards, some put on their usual off-day uniform of board shorts and flip-flops and were shaved at local barbers and salons.

After Saturday night’s Game 2 in Los Angeles, the Stanley Cup finals head to New York, the home of the Rangers. Much will be made of Madison Square Garden’s historic, dazzling, center-of-the-universe setting in Manhattan.

But when it comes to Cup fever, Manhattan might pale to its sunny, cross-country namesake, Manhattan Beach, and that town’s next-door neighbor, Hermosa Beach.

The Rangers’ Dan Girardi, battling Tanner Pearson in the first period, made a turnover that sent the Kings to a 3-2 win on Wednesday in Game 1 of the finals.Rangers Put Aside Turnover That Led to Overtime Loss in Game 1JUNE 5, 2014
All but one of the Kings players live there, as do the coach, Darryl Sutter, and general manager, Dean Lombardi. Most can walk or ride a beach cruiser to everyone else’s house. It is an unusual if not unique concentration that binds the team and turns a sleepy four-mile strip along the Pacific Ocean into an unlikely hotbed of hockey.

Trackback from your site.

A Manhattan Beach resident since 1976, Mike Dunitz has 30 years of experience as a real estate broker in the Beach Cities. Mike is known for his integrity, negotiating skills, and for delivering exceptional personal service.

About The Beach Broker

What clients are saying